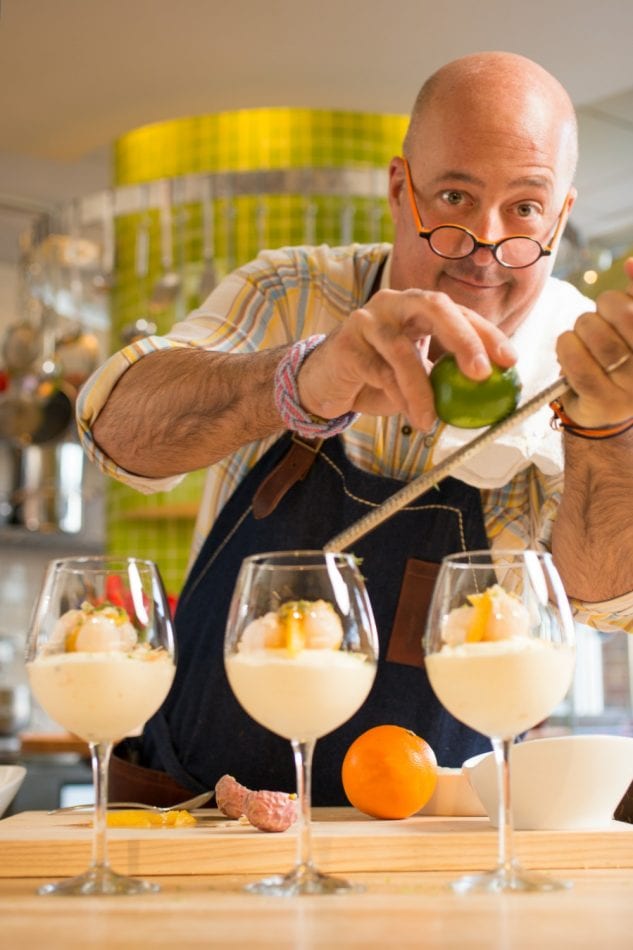 A three-time James Beard Award-winning TV personality, chef, writer and teacher, Andrew Zimmern is universally regarded as one of the most versatile and knowledgeable personalities in the food world. As the creator, executive producer and host of the Bizarre Foods franchise on Travel Channel (including Bizarre Foods with Andrew Zimmern, Andrew Zimmern’s Bizarre World, Bizarre Foods America and the new Bizarre Foods: Delicious Destinations), Andrew has explored cultures in more than 150 countries, promoting impactful ways to think about, create and live with food.

In 2012, he launched Andrew Zimmern’s Canteen, reflecting his fascination with food history from around the world. With a location at Target Field, home of the Minnesota Twins, and the Kansas City Royals’ Kauffman Stadium, the company will expand into Minneapolis’ new Viking Stadium and several other locations in 2016.

Inspired by visits to street stalls and markets around the world, Andrew Zimmern’s Canteen reflects the intersection of food and travel with menu items like cabrito sausage grinders made with an exclusive all-natural goat blend from Pat LaFrieda Meat Purveyors.  According to Andrew, “Diversifying the American diet is the most important step we can take towards decentralizing our food system, combating food insecurity, eliminating hunger and restoring wellness to our society.”

A Taste of the Good—and Bad— Life

Thanks to his parents who had him traveling around the world mouth first, Andrew knew from a young age that he wanted a career in food. As a teenager, Andrew spent his days at the beach and nights cooking in Long Island restaurants. After attending The Dalton School and then Vassar College, Andrew was on the fast track to success cooking in New York City restaurants helmed by Anne Rosenzweig, Joachim Splichal and Thomas Keller. He helped open and run a dozen restaurants, but he was also an active addict and alcoholic spiraling out of control. Crashed and burnt, he lost his apartment and spent a year living on the streets, stealing to support his addiction, ultimately leading to one last intervention by close friends. That brought him to the renowned Hazelden Foundation in Minnesota. Transforming his life around sobriety, Andrew began washing dishes at the Minneapolis outpost of New York’s Café Un Deux Trois in 1992. When a line cook fortuitously didn’t show up for his shift, Andrew took over his station, and in seven weeks was named Executive Chef, changed the menus and turned Un Deux Trois into one of America’s first successful gastro-bistros during his six year tenure.

Making Moves in the Media

Andrew’s revamped menu of French dishes shot through a Vietnamese and Chinese prism drew the attention of local media. Local news appearances led to regular TV work as the ‘in-house chef’ on HGTV’s early slate of programming produced in Minnesota. Rebecca’s Garden and TIPical Mary Ellen proved to be extraordinary springboards. Zimmern sold his restaurant partnership and volunteered to intern for a local glossy monthly magazine, TV and radio station. Within months he had a regular job as a features reporter doing live local news, became MSP Magazine’s dining critic and restaurant columnist, and hosted his own drive time radio show.

Singularly pursuing Travel Channel, he created a test pilot for what ultimately became Bizarre Foods. In 1997, Andrew founded the Minneapolis-based, multi-media content production company Food Works. A full-service operation that develops and manages content, Food Works oversees production and distribution for all of Andrew’s media endeavors, including his podcast Go Fork Yourself, his website AndrewZimmern.com and Shop Andrew Zimmern. Go Fork Yourself won the Stitcher Award for Best Food/Cooking Podcast in 2012 and AndrewZimmern.com was nominated for the best food website by the Webby Awards in 2013 and 2014.

Beyond television, Intuitive Content is working with clients on branded entertainment, including a partnership with Renaissance Hotels to create a digital series around The Navigators Table, exclusive behind-the-scenes access to today’s most admired chefs, writers and personalities.

Andrew was chosen as a mentor for Season 2 of Food Network’s All-Star Academy, alongside Alex Guarnaschelli, Curtis Stone and Robert Irvine.

Andrew is a contributing editor and Chef-in-Residence at Food & Wine Magazine and a senior editor at Delta Sky Magazine. He has been nominated for 8 prestigious James Beard Awards, including digital content nominations, and he has won awards for “Outstanding Food Personality” (2010), “Best TV program on location” (2012), and “Outstanding Personality/Host” (2013). In 2016, Andrew was named one of “America’s 50 Most Powerful People in Food” by The Daily Meal.

The success of his Travel Channel series and Andrew’s background as a journalist led him seamlessly into the world of publishing. Giving a behind-the-scenes look at the cultures and lifestyles he found in his favorite destinations, The Bizarre Truth (Broadway, 2009), inspired readers to travel, explore and eat the unconventional. Andrew Zimmern’s Bizarre World of Food: Brains, Bugs and Blood Sausage (Delacorte, 2011) gave younger fans a backstage look at his culinary adventures. His experiences tasting iconic dishes from every hemisphere has inspired his book designed for young adults, Andrew Zimmern’s Field Guide to Exceptionally Weird, Wild, Wonderful Foods: An Intrepid Eater’s Digest (Feiwel & Friends, 2012), a pop culture-influenced look at funny, fantastic and occasionally bizarre ingredients.

When he’s not sampling unusual dishes at home and abroad, Andrew teaches entrepreneurship and offers the latest insights on food issues and problem solving to the students of The Lewis Institute for Social Innovation at Babson College, a learning laboratory for the real-world problems facing business and society. He sits on the board of directors of Services for the UnderServed, the National Youth Recovery Foundation, Foodie Tout and Taste of the NFL. In his rare downtime, he relaxes in Minneapolis with his wife Rishia, son Noah and his pug Pretzel. Behind closed doors you can find him reading, cooking, and playing electric guitar.